FREE SHIPPING - All prices include normal delivery in the Contiguous U.S. 48 States

We use fresh hams that are brined and slow smoked for fully cooked perfection. We then vacuum seal the half-cut ham without slicing, so that you can create the slice thickness you prefer at home.

Serve this ham at room temperature or warmed to your preference. We guarantee delicious tastes in every bite!

What is a Smoked Bone-In Ham?

It is created from a fresh, bone-in ham portion that is brine-cured, slow-smoked & fully cooked over real hickory wood chips. It has a perfect blend between sweet & savory.  The bone is not removed during the smoking & cooking process.

What Side Dishes Should I Serve with Ham?

The flavor of smoked ham pairs perfectly with almost any of your favorite side dishes, but we suggest a potato and green vegetable side dish, along with your favorite bread & dessert to make a great tasting ham meal.

How Much Ham Do I Need 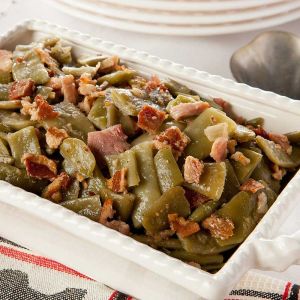